Slide rules for use in the field or office were standard tools for the surveyor. And specialty slide rules, with specific scales for use in tacheometric – or, stadia-metric – calculations, were sold by several manufacturers. The stadion is a unit of distance from ancient Greece, on the scale of about 600 feet or about 190 m, and a stadia measurement is a method to rapidly determine horizontal and vertical distances, typically on the scale of the stadion, using a telescope (usually a surveyor’s transit or a theodolite) and a vertical graduated rod. If you’ve ever seen a surveyor at a telescope on the side of the road, with a partner down the way holding a tall rod with markings on it, this is what they were doing.

An optical telescope will have a “field of view” for a particular set of optical focal lengths and eyepiece style. A good transit telescope might have an objective lens of about 2 inch diameter or less, and perhaps a focal length of about 12 inches or less. Typical magnification might be about 40x. Only a certain cone of light rays can enter the objective lens and become focused through the eyepiece onto the observer’s retina; the angular divergence of this cone would be the field of view.

Eyepieces, which typically use multiple shorter focal length lenses, will have correspondingly larger fields of view, perhaps \(\alpha_e\) = 45-70\(^\circ\) or so. However, the magnification of the telescope, given by \(m = F/f_e\) where \(f_e\) is the eyepiece focal length, will reduce the field of view of the telescopic system by this factor:

Thus, a magnification of about 40x would give an overall field of view of about 1-2\(^\circ\), or about 15-30 mrad, for instance. Suffice it to say, the scope used as a tacheometer will have a field of view on the scale of a small number of degrees, or tens of milliradians.

With a fixed field of view, an object of fixed size \(\Delta y\) will appear proportionally smaller through the telescope when viewed at larger distances \(r\), as illustrated below.

For use as a transit telescope, markings on the optics of the telescope provide a view to the user of lines that mark angular measure, or stadia lines, such as at \(\pm\) 5 mrad, for instance.

Now imagine one aimed the telescope at a vertical rod off in the distance, and that the rod had markings of feet and inches along its length. If through the telescope the user views the upper and lower stadia lines (at \(\pm\) 5 mrad) going across marks on the rod that are known to be separated by 12 inches (one foot), then the rod must be located approximately 100 feet away. 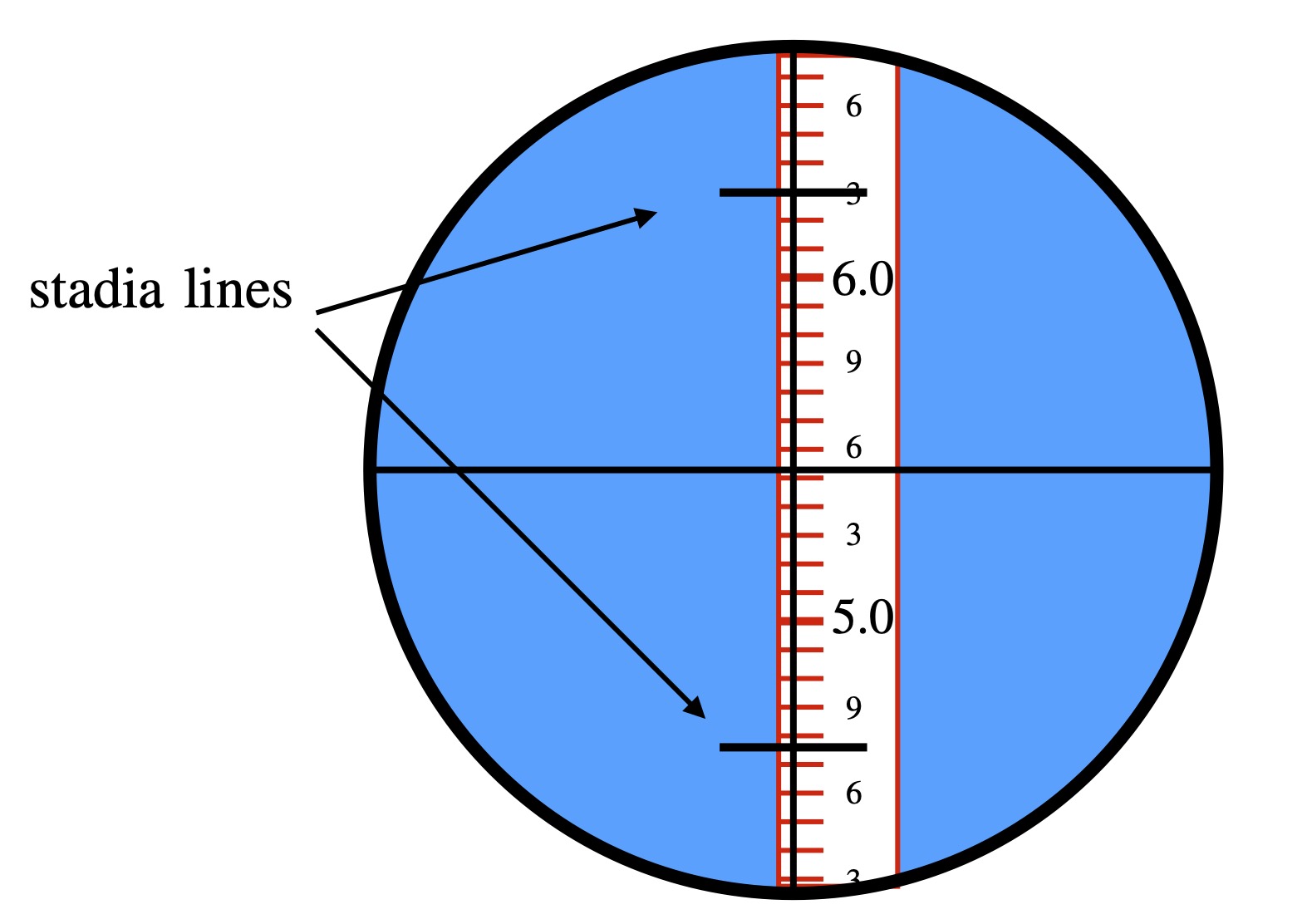 View of distant stadia rod through the transit telescope.

Suppose \(\alpha\) is the total angle between two stadia marks visible through the telescope. The vertical distances are read along the rod which cross the upper and lower stadia lines at \(\pm\alpha/2\) = 5 mrad.

Note that when more accuracy in the distance is required, particularly for closer objects, surveyors would typically use a chain or tape to measure the distance directly if possible.

Presume the surveyor is using an instrument with stadia marks \(S1\) and \(S2\) visible through the telescope and separated by an angular field of view of \(\alpha\). A typical measurement might go something like this: 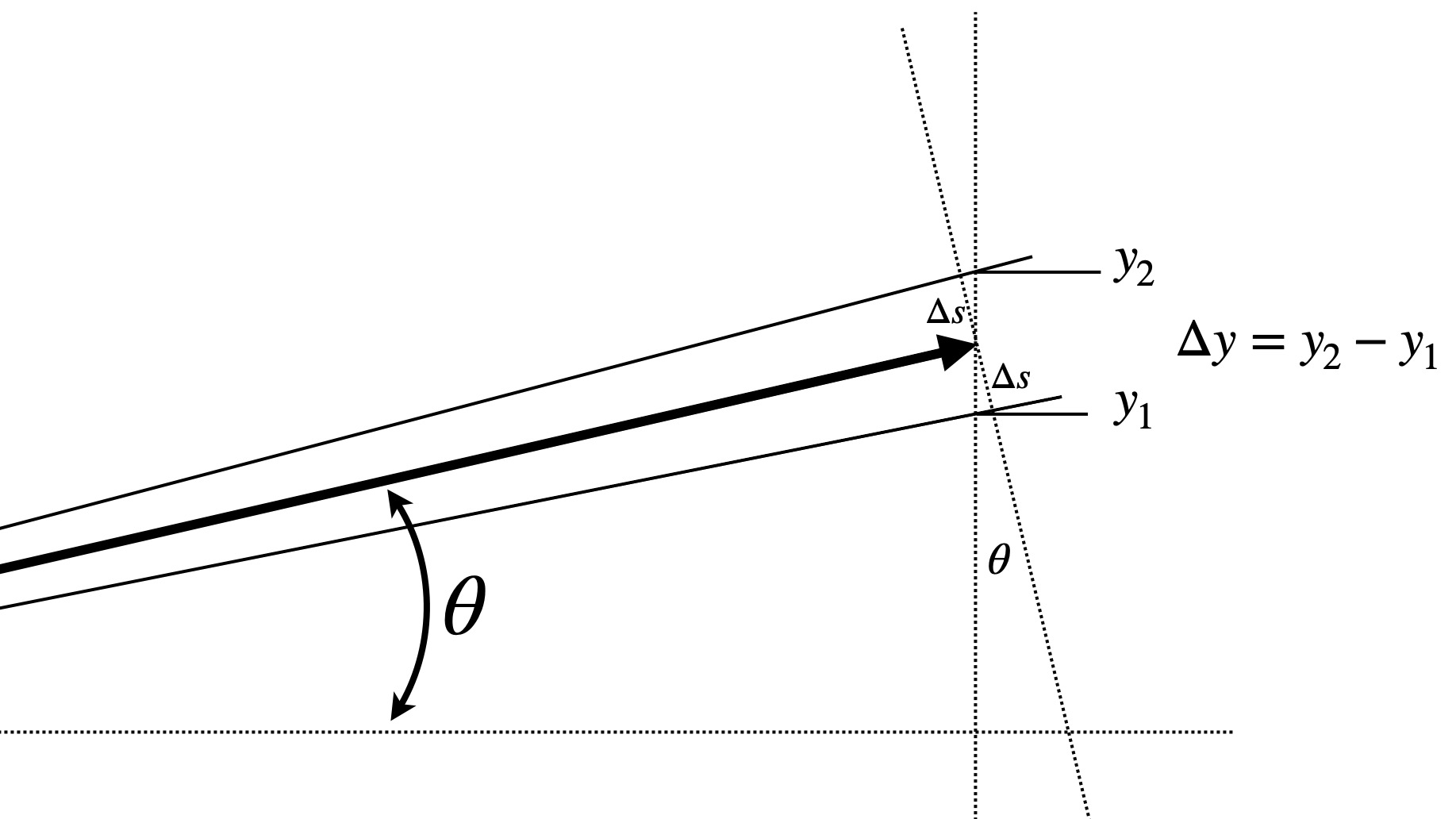 From this figure, we can see that

We see that while standard slide rules have standard trigonometric scales, new scales for computing \(\cos^2\theta\) and \(\cos\theta\sin\theta\) (which is also equivalent to \(\frac12\sin2\theta\)) would be very useful for quick in-the-field survey calculations, and these are what the stadia slide rules provide.

The basic stadia slide rule will invoke multiplications of the quantities \(\cos^2\theta\) and \(\cos\theta\sin\theta\), so let’s plot these functions:

So, let’s re-make our plot but switching the axes, using a logarithmic scale on the horizontal axis, and using angles between zero and \(45^\circ\) on the vertical scale. Note: 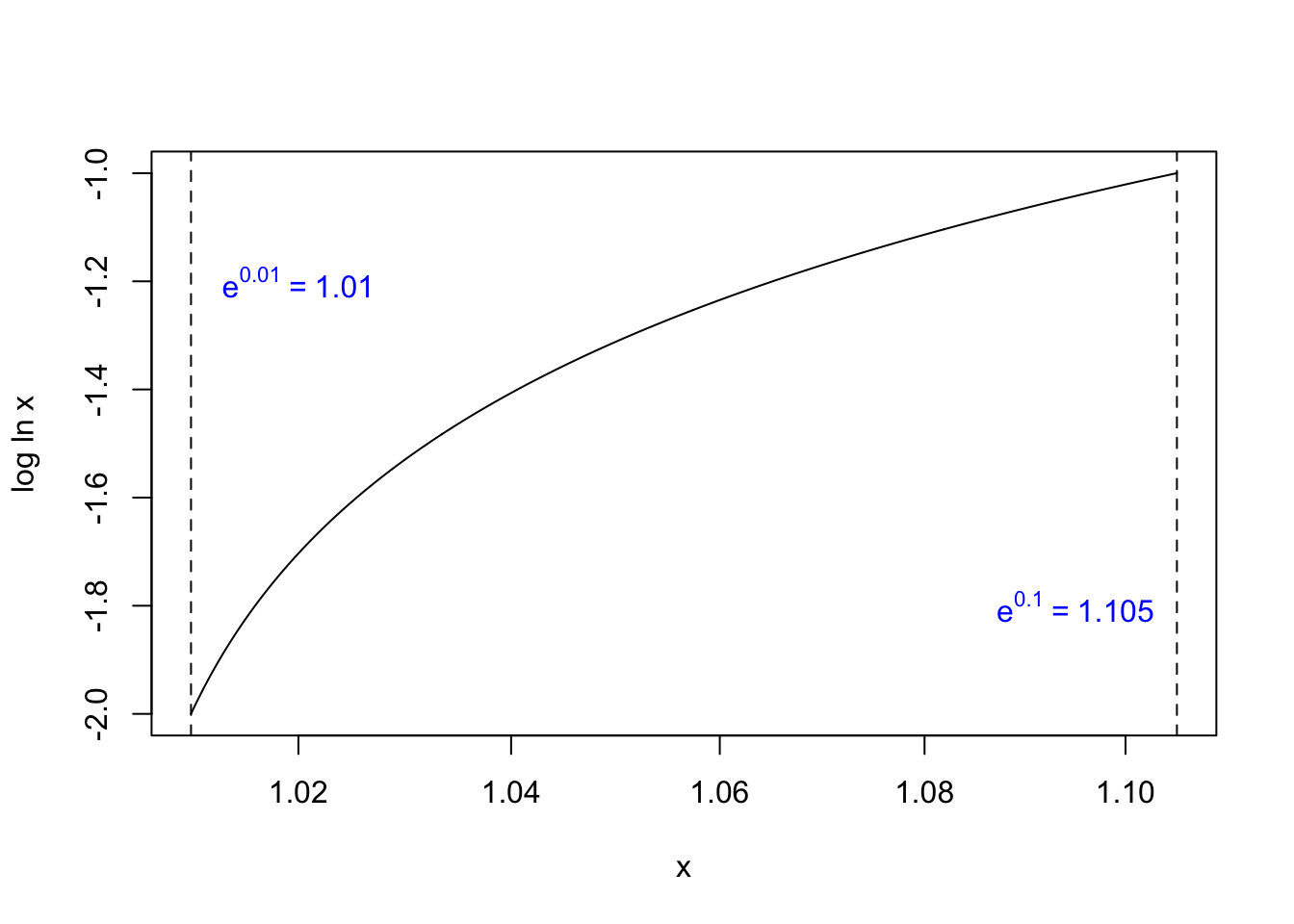 The horizontal spacing between the vertical hash lines in the plot above give the spacing of the five-degree markings on the major angular scale on the slide of the stadia rule, where the main axis shown would be represented by an A scale (i.e., two decades, from 0.01 to 1.0) on a standard slide rule: There also can be a separate scale on the slide for use when small angles are involved. For small angles, the cosine-squared quantity is assumed to be equal to one. So we simply repeat the cosine-times-sine calculation but for values 0.001 \(\lt x \lt\) 0.1, here indicated at half-degree intervals: 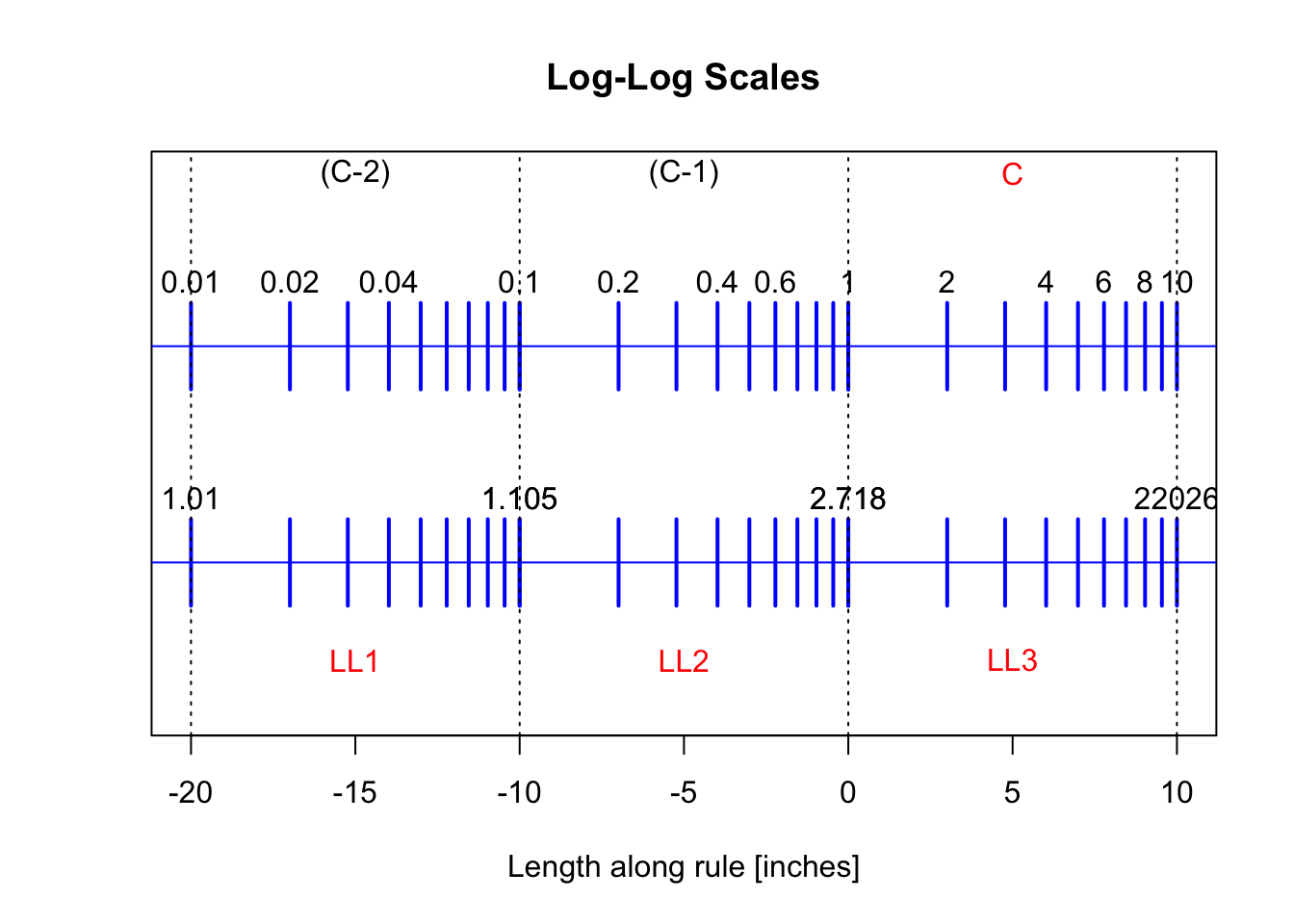 The markings on the slide of the rule would look something like this:

The example of a stadia slide rule from the collection is the Keuffel and Esser Model 4100, manufactured in about 1915-1922 and shown in the image below. The main scale, found on the lower stock, is an A scale, from 1 to 100. On the upper stock one finds a similar scale, often called the R scale where R = 10 \(\times\) A, which is labeled from 10 to 1000. The R scale is used to select the overall distance \(r\) in our discussions above. Notice that the left-hand side of the upper scale overlaps with the right-hand side of the lower scale.

Now suppose instead that the angle was 1 degree 43 minutes. In this case,

The stadia rule used above was the earliest rule of this type produced by Keuffel and Esser, the 4100. This model was first advertised in the K&E catalog in 1906, but in 1925 a new version – the N4100 – was revealed. This new stadia rule had the same scales, but with an additional scale on the slide to be used to determine horizontal distances when small angles (less than \(18\circ\)) are involved. On the original 4100, an additional “A” type scale (1-100) was included on the back of the slide; when the slide was reversed it could be used with the “A” type scale on the bottom of the rule for performing standard multiplication and division calculations. The N4100 added a standard “C” type scale (1-10) on the back of the slide thus allowing quick computations of square roots, for instance. The N4100 also added inch and centimeter scales on the edges of the slide rule.

About the same time that K&E was producing their first stadia rules in the U.S., another American company, Kolesch and Company in New York, was selling slide rules including a stadia rule as shown in the figure below. 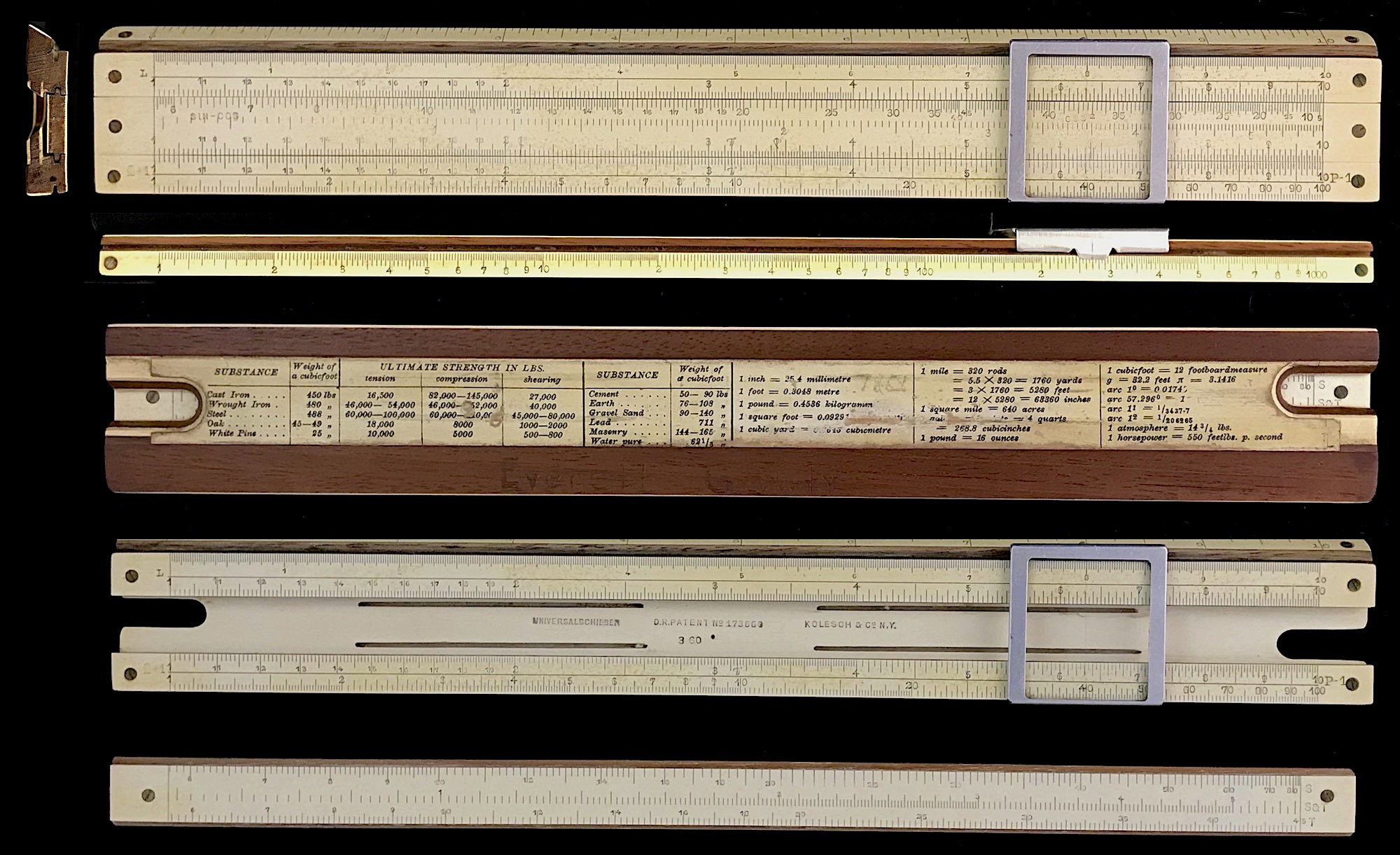 For this rule, a similar scale of \(\sin\theta\cos\theta\) and \(\cos^2\theta\) is present at the top of the slide, but only extends from values of 0.1 to 1, which is read from the standard C/D scales. Note that a D scale exists on the top of the stock next to the stadia scale. For interpreting values of \(\sin\theta\cos\theta\) between 0.01 and 0.1, a second stadia scale is present on the slide below the first. Though the rule has “Kolesch & Co N.Y.” engraved in it, the style of construction and application of German patents is indicative of Albert Nestler.

One of the more sophisticated stadia rules being used at the end of the slide rule era was the Aristo Geodat Model 0958. The front of the 0958 has 12 standard scales found on many slide rules for performing standard mathematical calculations, including trig scales and a P scale. On the back of the 0958 are another 10 scales. Besides C, A, B, K, and L scales, there are stadia scales that include:

Aristo made two versions of the slide rule, one where the angles on the rule were in units of degrees, but also another version where the angles are written in units of the gon (or, grad or gradian or grade). The gon is a metric-centric measure of angle, where a right angle is made of 100 gon, which is equal to 90 degrees. The gon is not used in the U.S. but is still used by many surveyors in Europe. A version of the Aristo 0958 with gon as the angular unit is shown below. As in the (presumed German made) Kolesch rule, the angles on the Aristo are taken opposite a standard C scale from 0.1 to 1 or 0.01 to 0.1, providing a bit more accuracy in the readings, and allowing much more flexibility in the slide rule’s use for other calculations. In the image below, note how the bottom scale on the slide, labeled \(\cos^2\) in red, changes from a \(\sin\cos\) scale (in black numbers) to a \(\cos^2\) scale (in red numbers) at an angle of \(50^g\) (= \(45^\circ\)). The scale above this one, labeled \(\sin\cos\) (in black), gives the angles for the next lower decade in values found on the C scale, thus corresponding to the lower decade on the A scale of the K&E.

The instructions that came with the Aristo 0958 provide a very good explanation of all of these scales and their use, and can be viewed here (courtesy Peter Lang, via IRSM).