The acquisition of a Keuffer and Esser Mystery Rule caused me to search out and acquire a K&E model 4097D, a pocket slide rule which is the only other slide rule with the same exact scale set. While the “Mystery Rule” was never mentioned in any K&E catalog, the 4097D was one of the members of the popular “Ever-There” series (models 4097 and 4098) manufactured in the 1930s and 40s made from plastic rather than wood. The 4097D was the precursor to the 5-inch pocket model 4161-1, which came out in the early 1950s. So, from an online search, I found a 4097D for sale at a reasonable price and added it to the collection for comparison against the Mystery Rule.

The particular 4097 that I received came rather complete. The rule was packaged in its original box, which also contained the original instruction sheet for the 4097D. The slide rule itself is in very good condition. Its serial number of 065234 indicates that it was likely made in 1944, as inferred from the McCoy web site, and it has the circular “Keuffel and Esser, Co. – N.Y.” logo from that era on the slide. Also included is the original leather sheath. Interestingly, the sheath is embossed with the logo “K&E CO.” which is the same logo that is found on the slide of the 1934 Mystery Rule in the Collection. And finally, also printed in black ink on the sheath is the name “Lt. Milton S. Shaw.” 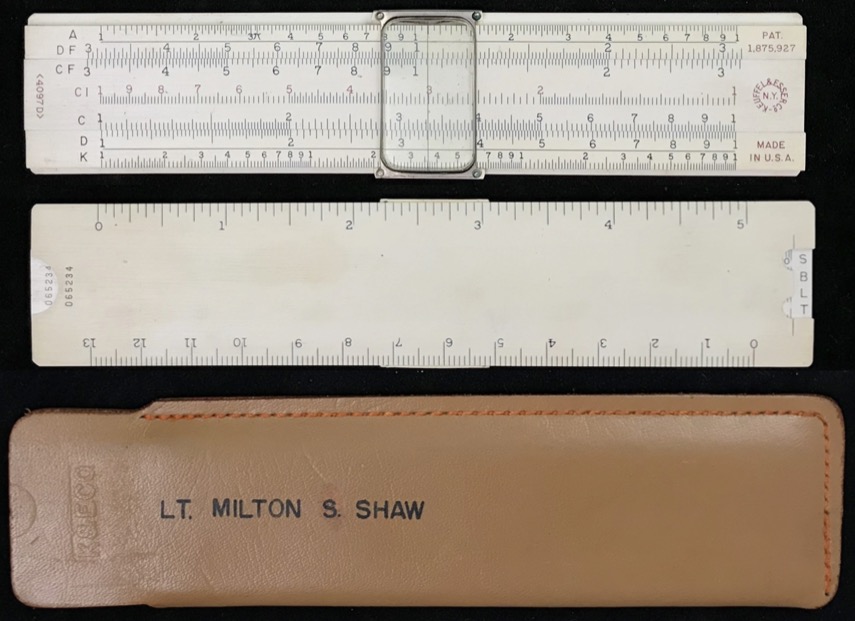 I emailed the dealer in Terrebonne, Oregon, from whom I purchased the rule, to see if he knew any of the history of this particular 4097D. But, the rule had been received from “an auction sale box that I bought. I don’t have any info for you.” And so it was time to search the internet…

A search of the owner’s name came up with a Lieutenant Milton Samuel Shaw, USNR, who commissioned the U.S.S. Manayunk in 1945.42 The Manayunk was built in 1944-1945 at Commercial Iron Works, Portland, Oregon. After its commissioning by Lt. Shaw, the Manayunk was assigned to the Asiatic-Pacific Theater during World War II, and then decommissioned after the war in 1946, at Astora, Oregon. Other searches did not turn up any other relevant “Lt. Milton Shaw”s during that period, though the search certainly was not exhaustive. But the fact that this 1944 slide rule came from Oregon, where a Lt. Shaw was known to have been stationed during this time period, was intriguing.

Then, a separate hit during the internet search caught my attention. It was an obituary in the Washington Post of a Milton Shaw, who had died in 2001.43 This Milton Shaw was born in 1921 in Knoxville, Tennessee, so would have been 24-25 years old at the time of the commissioning of the Manayunk during the war – again, a quite possible scenario. Skipping to the end of the article, a single sentence reads, “During World War II, he served in the Navy as an engineering officer in the Pacific theater.” Could this be the same person?

Further online searching produced another similar obituary that was printed two days earlier in the New York Times.45 Again, at the end of the article, is the revealing statement, “Mr. Shaw served in the Pacific in World War II as an engineering officer in the Navy’s Amphibious Fleet, and reached the rank of lieutenant junior grade.” Same name, same region of the country, same time period, same rank… The facts above lead one to believe that the slide rule in question may indeed have belonged to Lt. Milton S. Shaw who commissioned the Manayunk in 1945 on the coast of Oregon, and quite likely this Lt. Shaw was the Milton Shaw whose obituary was found in two major U.S. newspapers in 2001.

So what brought this person to be prominently mentioned in these two nationally acclaimed newspapers? It turns out that Milton Shaw, who was in the U.S. Naval Reserve during the war, became “… a key civilian official in the development of the Navy’s nuclear ships in the 1950s and the Atomic Energy Commission’s nuclear reactors in the 1960s and early 1970s…”46 He was known for being the project manager for the construction of the U.S.S. Nautilus, the world’s first nuclear-powered submarine in 1954. He was also project manager for the nuclear propulsion plants of the first nuclear-powered aircraft carrier, the U.S.S. Enterprise, launched in 1960. In addition, from 1964 to 1973, he was the Atomic Energy Commission’s director of reactor development and oversaw research laboratories nationwide. The AEC, formed in 1946, was the precursor agency of today’s U.S. Department of Energy. 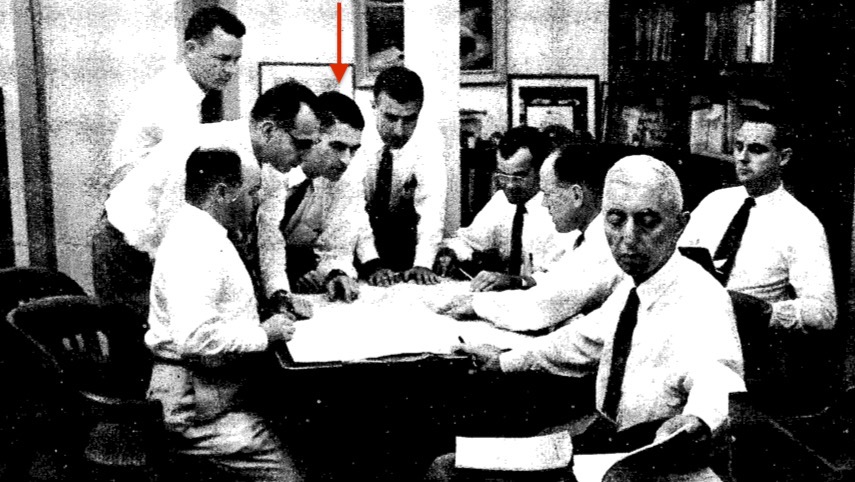 There is still the possibility that there were more than one “Lieutenant Milton Shaw”s in the Pacific during WWII. If the Milton Shaw from Knoxville had the middle name “Samuel,” then this would help clarify whether this could have been the person who commanded the Manayunk. However, in each reference to the AEC’s Milton Shaw, as well as in the University of Tennessee yearbook, a middle name or middle initial is never given. Also through online investigation I was able to locate an image of the tombstone at the cemetery where Milton Shaw of the newspaper articles was buried in 2001, and no middle name or initial is presented there, either.

While middle names are common in the U.S., it is certainly not uncommon for a person to not have a middle name; however, when a person without a middle name joins the U.S. military, a middle name is assigned if one is not presented during enlistment. So “Samuel” may have been given to Lt. Shaw, or perhaps he created the name himself for the records during the enlistment process. It is quite intriguing that the middle initial on the case appears to have been scratched out at one time, and replaced with an “S.” of a slightly different size than the neighboring “S” following it. One can imagine a young recruit not wanting to have a false middle initial on his equipment, but a commanding officer requiring that it be restored.

According to the naval records, after being decommissioned in 1946 the Manayunk remained in Astora, OR until being transferred to the National Defense Reserve Fleet in Olympia, WA in 1961. It was struck from the Naval Register in September 1962, and sold to Mr. A. B. Church in August 1971 for non-transportation use. He took delivery in January 1972, and the ultimate fate of the Manayunk beyond that date is unknown. One wonders if a small box containing a slide rule was sitting in one if its drawers for all those years and finally uncovered only to be eventually sold on eBay in 2021.

Overall, the circumstantial evidence is fairly suggestive that this slide rule belonged to a young Lieutenant Shaw from Knoxville, Tennessee, during the second World War, who later played a major role in the development of the U.S. nuclear naval fleet. While a speck of mystery remains, the inclusion of Lt. Shaw’s slide rule in the Collection is all thanks to the K&E Mystery Rule from Saginaw, Michigan…