While wandering in an antique store in West Dundee, Illinois, a distinct-looking object sitting in a glass display cabinet caught my eye. Leaning against the inside wall of the cabinet, it certainly looked as though it could be a circular slide rule, though I had never seen this particular style leather case before. 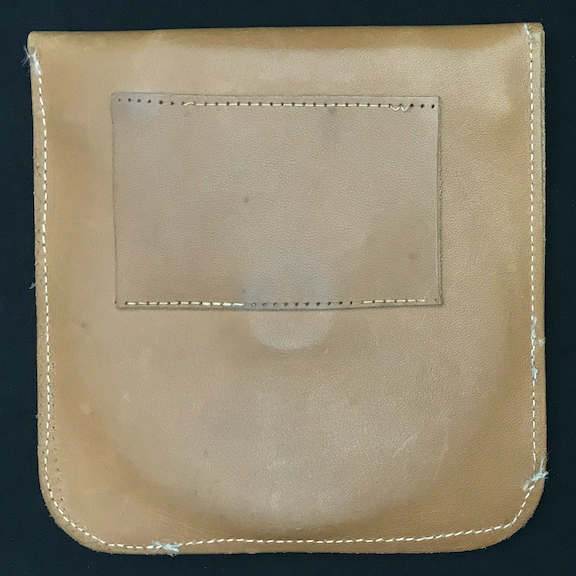 I asked the woman behind the counter if I could take a look, but was immediately told that it was not for sale, indicated by the “NSF” sticker applied to its back. After a few more minutes in the store, an older woman asked if there was anything I’d like to see. I responded that the only item in the store that piqued my interest was that NSF item in the glass cabinet. Eventually, after a final push, I was allowed to take a look.

It was indeed a slide rule, labeled “Rota-Rule 50" Pocket Size Circular Slide Rule” on the initially-hidden side of the case. And the rule itself was quite elaborate with a large number of scales, an interesting “brake”-like handle, with a smooth operation when dialed. At that time I had never heard of a Rota-Rule, though I had been gathering slide rules for several years by then. The woman – the store’s owner – knew it was special, but hadn’t priced it yet, hence the NSF sticker. So, I gave her my info and said I would be very interested to hear from her if she could provide a price.

Within an hour I made it back home, where I went straight to the internet to look up “Boykin” (and, almost certainly, the store owner did so simultaneously!). On Rod Lovett’s eBay page39 a search for “Boykin Rota Rule” produced a very limited number of hits, with the most recent eBay sale being at auction for $400 in 2014. Wow! Further research that night showed me that this special rule, produced in the 1960’s, was a highly sought-after item. From the Oughtred Society web site I ascertained that Boykin produced two models – the 510 and the 560 (the one here is the 510) – and that a total of only 200 Rota-Rules were ever manufactured.40 Of the 200 slide rules produced, only the locations of a very small handful were known to slide rule collectors. This, hopefully, was about to become one more.

So, expecting a very high price and probably out of sight (at least for me), I was prepared to let it go. But within one or two days, the owner called me and left a message. I quickly called her back and she told me she could sell it to me at a price 3-4 times lower than I was expecting. We talked awhile, and finally (after consulting my wife, of course, as it was still a significant purchase for me!) I was able to say, “I’ll take it.”

Leaving work the next day, I drove straight to the store and purchased the Rota-Rule before anyone changed their mind. After looking it over one last time (like I needed to do that…) and paying for the rule, the owner said to me, “Hey, wait a minute. I think I still have the box in the back. Let me go get that.” “Box?” I thought. Wow, if it has its original box then its value just went up a notch. But when the box surfaced, it actually went up several notches – it was the original Rota-Rule box alright, and inside was: a (plastic wrapped) instruction booklet, a warranty card, two advertisement fliers (one three-holed punched), two copies of a double-sided Boykin-produced table of mathematical constants, a Parts List of Boykin products, and a Trial Offer letter from Mr. Boykin introducing the rule to the prospective owner, as well as a 1960’s magazine advertisement that was evidently obtained by the original owner thrown in for good measure! If the store owner noticed me shaking in my boots while she packed it all up, she didn’t let on.

Collecting myself, I asked the woman if she knew anything about the history of this particular slide rule and its owner. She then told me about an old friend of hers and her husband’s, named Bernard Barr, who was a retired nuclear engineer that had had a long career associated with nearby Argonne National Laboratory, the birthplace of the world’s first functioning nuclear reactor. Mr Barr was the original owner and an active user of the device, and they recently had acquired the rule from him. She and her husband were excited that I was a physicist and familiar with the lab and with the subject matter, all of which, she confided to me later, helped with “the sale” and the final pricing of the rule as she was excited to find a suitable new owner for her friend’s item.

The totally unexpected find of a rare slide rule and its original packaging contents has made this purchase the most exciting I’ve had as a collector thus far. It also greatly inspires one to keep up the hunt! 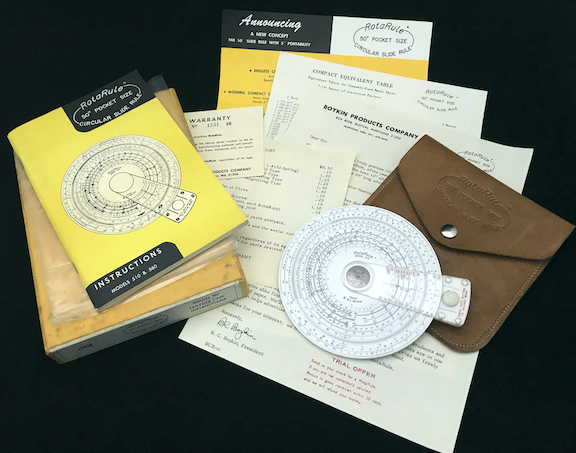