Slide rules were still very much in use during the early days of space flight, leading right up to the USA manned lunar missions of 1969 and the early 1970’s. The slide rules which appear to have been used in many of the National Aeronautics and Space Administration (NASA) space missions were all-metal rules, particularly those made by Pickett, USA. Perhaps most famous of this group is the Pickett Model N600-ES which was taken to the moon by astronaut Buzz Aldrin, who many years later sold the device at auction for the amount of $77,675. 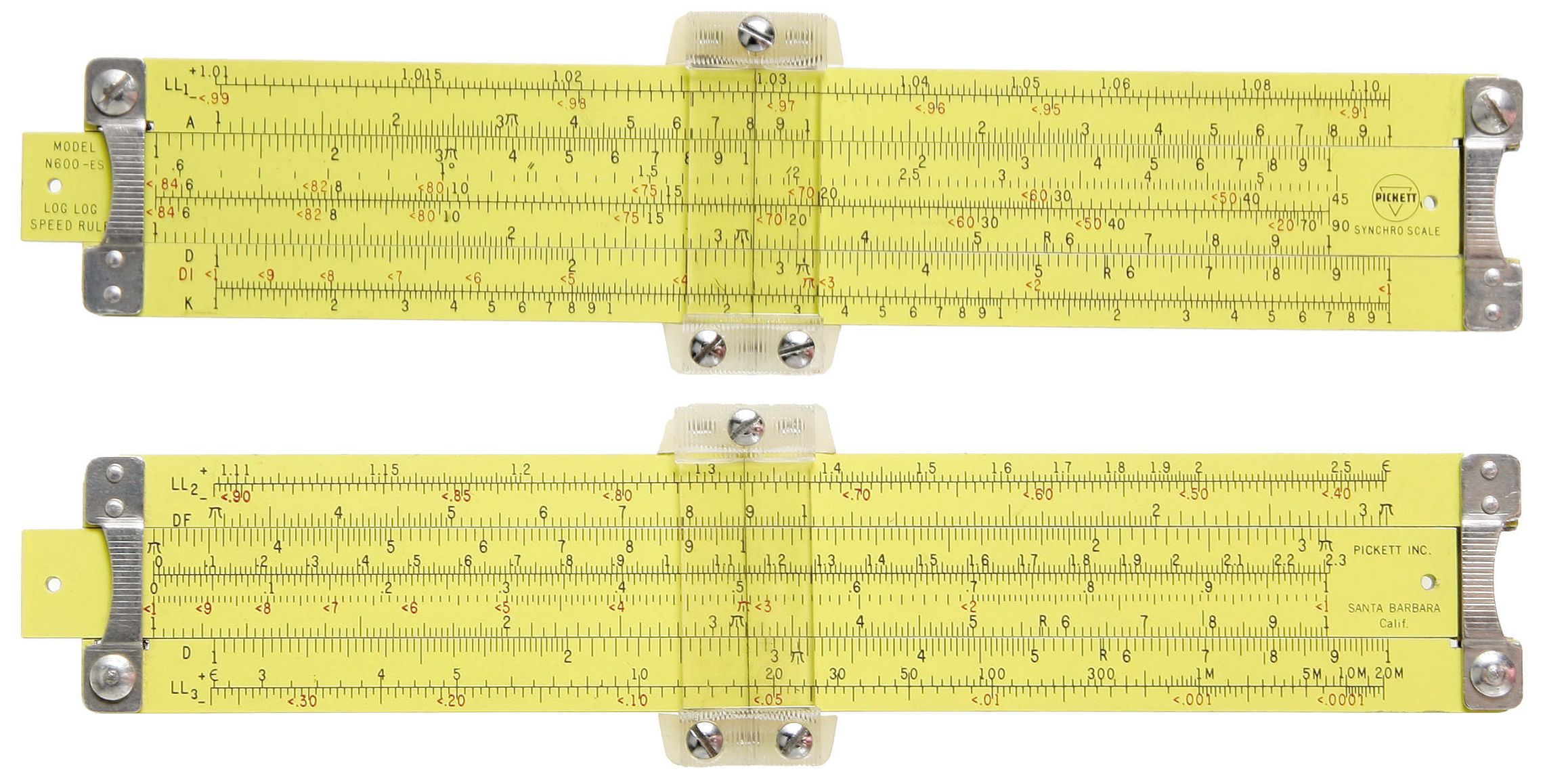 Aldrin’s rule is famous due to having gone to the moon on the first lunar landing mission and, accordingly, for its auction value, but it certainly was not the first slide rule in space. Earlier NASA missions had slide rules on board, and no doubt Russian cosmonauts also carried slide rules on their missions as well. In fact Dr. Aldrin himself was photographed during the Gemini XII mission inside the spacecraft with what appears to be a Pickett 600-T or N600-T slide rule floating near his head. (Image below courtesy of NASA.13) 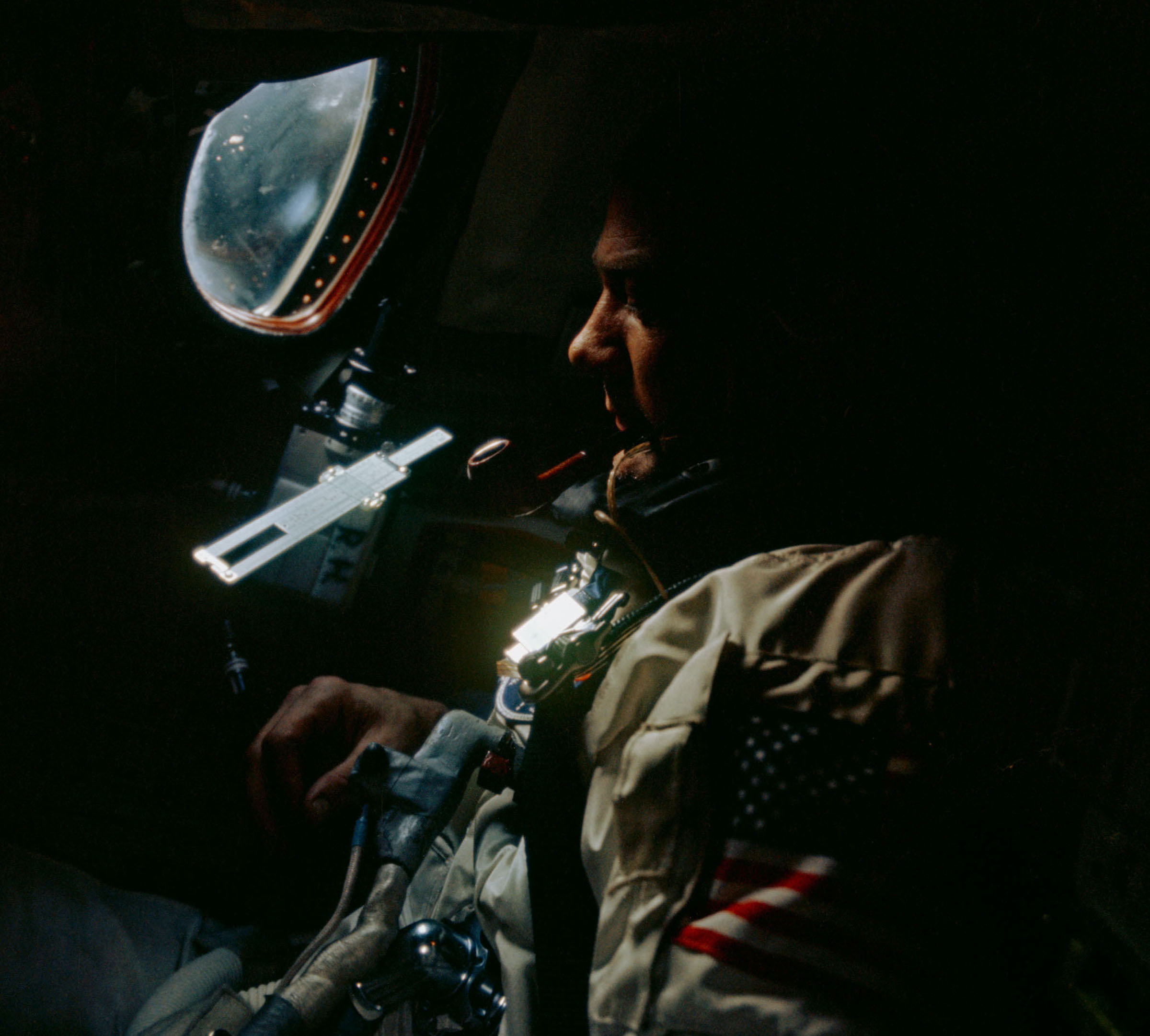 Another Pickett N600-ES was used on the Apollo 13 mission and can be found at the Smithsonian’s National Air and Space Museum.14 In addition, the slide rule carried by astronaut Ron Evans of Apollo 17 was also a Pickett N600-ES and was sold at auction for $3500 in 2008.15

The N600-ES slide rule from the Collection shown in the figure below has the same exact hardware and logo as Buzz Aldrin’s Apollo 11 rule. This model of the N600-ES rule can be dated to around 1962-64. The Apollo 11 mission took place in 1969, and hence some believe that the rule Aldrin had may have been his own personal rule, rather than one procured directly by NASA for the mission, though this is pure conjecture.

N600-ES from the Collecton. The rule, including its logo, is identical to that of Buzz Aldrin.

Metal slide rules such as those produced by Pickett are much better suited for the environment of space flight, and so might have been purchased in bulk by NASA at some point, and later issued to the various missions. For instance, the Apollo 13 N600-ES at the Smithsonian can be dated to roughly 1962; the Apollo 13 mission took place in 1971.

The Pickett Model 600 was originally made from a Magnesium alloy, a sample of which is found in the Collection:

Early Model 600 from the Collecton.

As with all other models, the rule was changed to Aluminum in the early 1950’s. The newer Model 600 was given an Ln scale, and the model N600 added red coloring to some of the scales for easier reading. By the mid-1950’s Pickett had introduced the Eye Saver yellow for its models, and so N600-ES and N600-T (traditional white) models became available. For an interesting comparison, the Eye Saver yellow of the N600-ES can be contrasted to the traditional coloring of the N600-T in the following images of the slide rules in the Collection:

An N600-ES from the Collecton.

N600-T from the Collecton. Note the earlier logo version.

The N600-ES appears to have been one of the slide rules of choice for the lunar missions, and for good reason – pocket-sized, lightweight aluminum, easy to read, full complement of scales. And Pickett quickly used this fact in their marketing, as can be seen on the box for the N902-ES slide rule in the Collection: 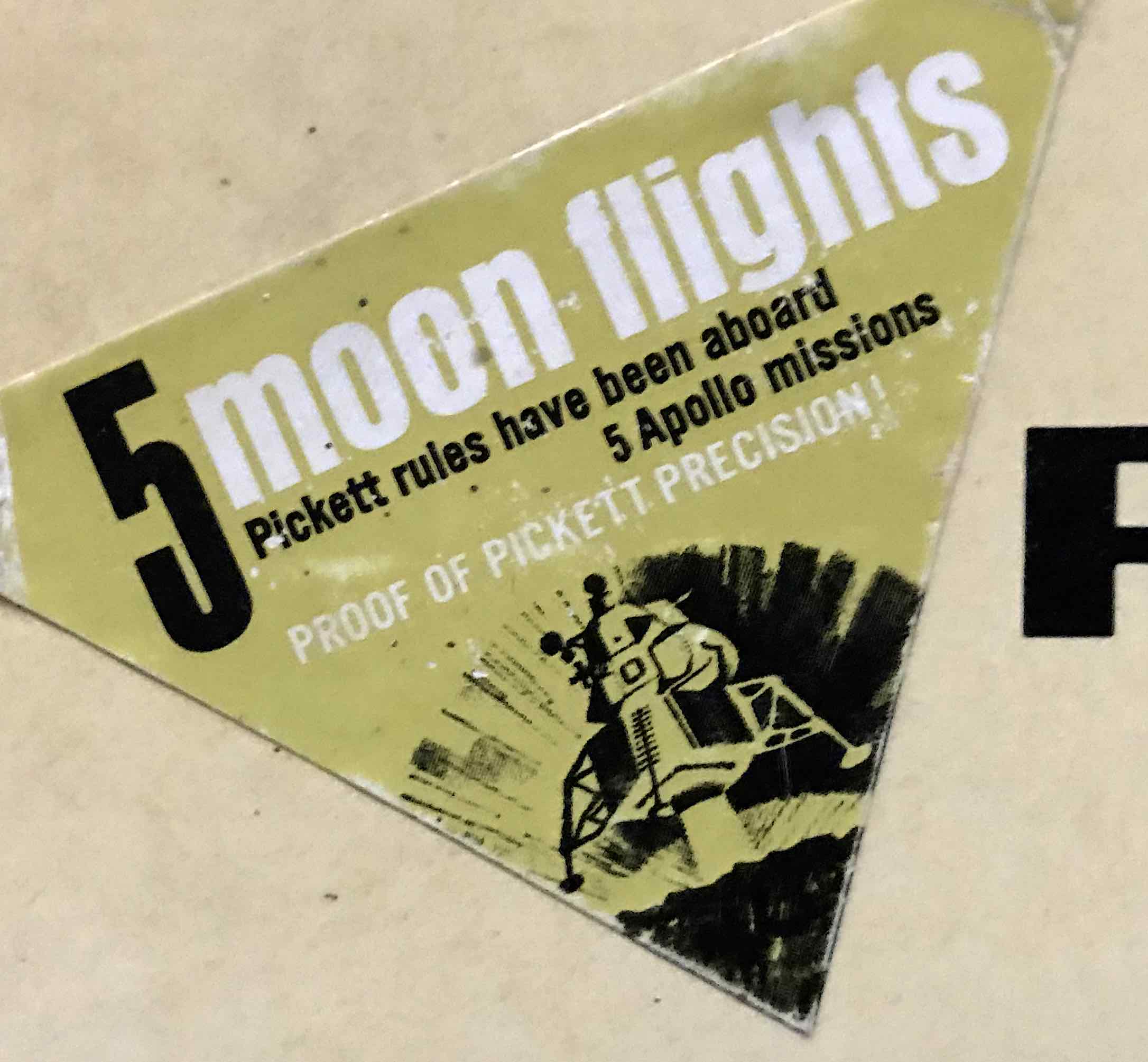 Sticker on outside of box.

The moon missions gave Pickett much notoriety for their precision aluminum slide rules, and the auctioning of Buzz Aldrin’s N600-ES has made this particular model highly sought after. However, not all N600-ES models are the same, as the logo was changed over time. When sellers of rules claim to have a model “identical to Buzz Aldrin’s,” the buyer should look carefully at the logo to be sure. 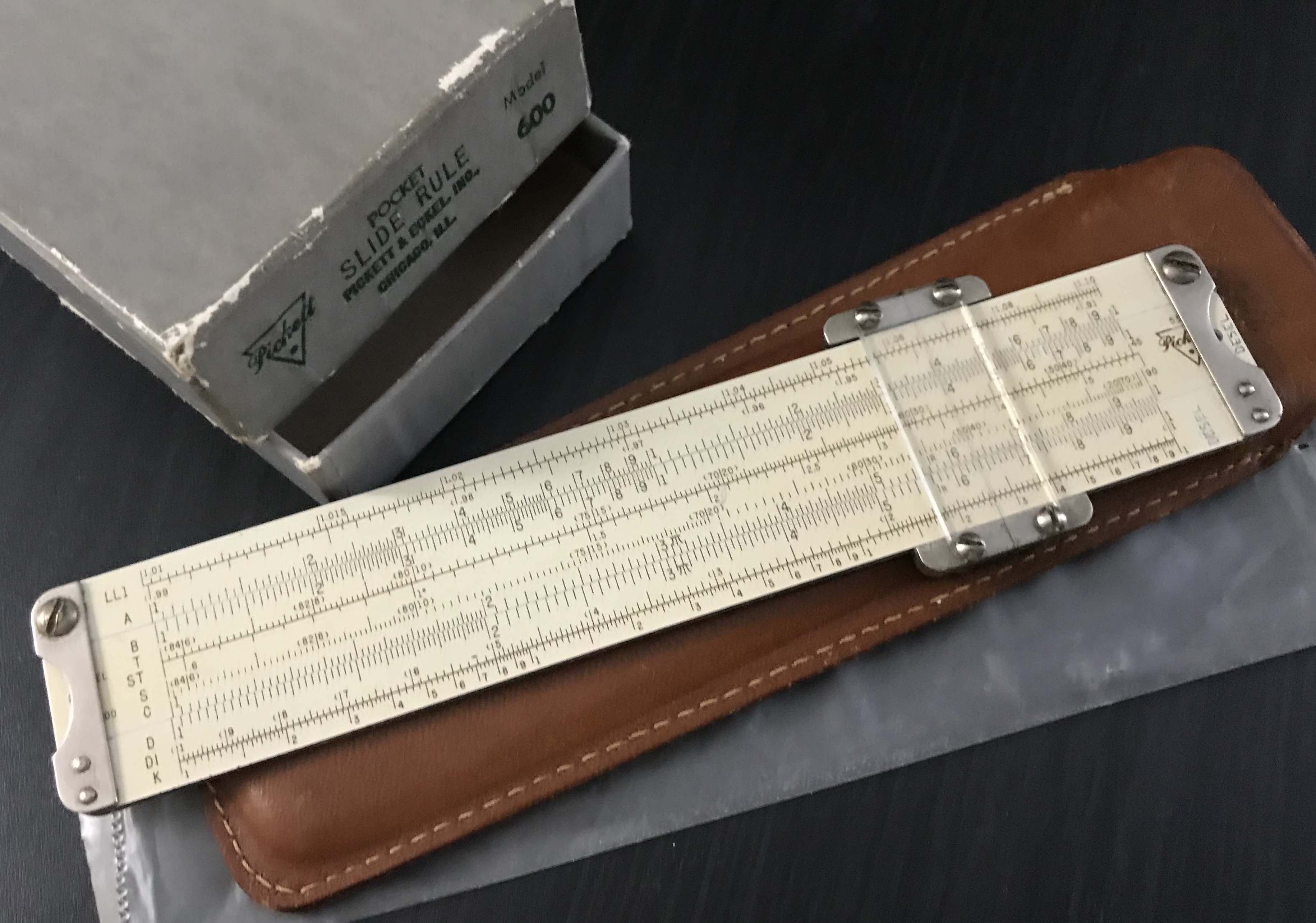 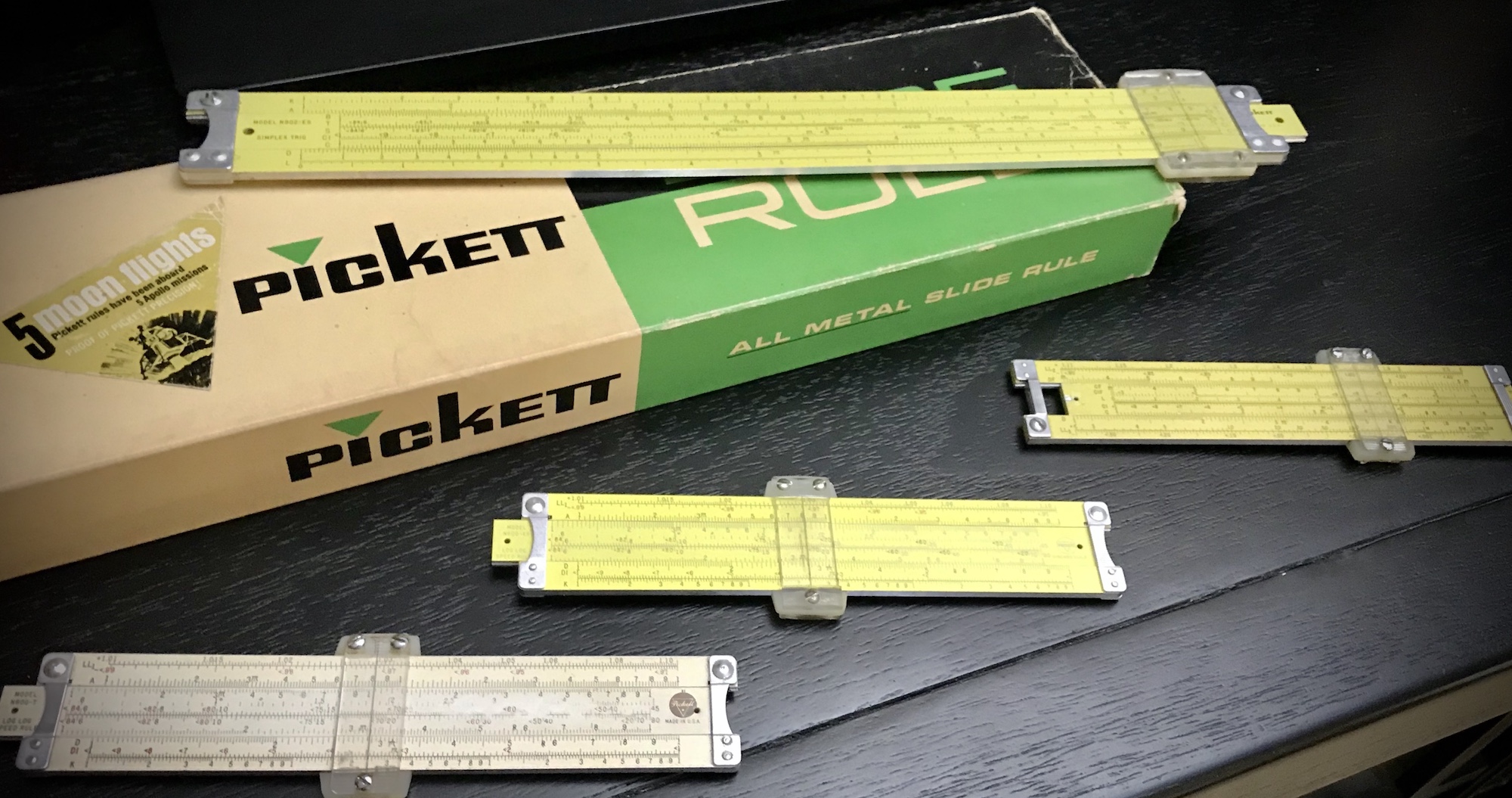