When the use of complex numbers in electrical engineering problems became more commonplace, vector slide rules were introduced by several manufacturers that made the evaluation of trigonometric functions with complex arguments much easier. The new rules had access to values of hyperbolic trigonometric functions which are needed to compute quantities such as the sine or tangent of a complex number. After such scales were introduced by K&E in the late 1920s, Hemmi (or, Sun Hemmi) came out with a new model – No. 153 Electrical Engineers Universal Duplex – which had its own unique set of scales for such problems.

A unique feature of the Model 153 was the central use of a mathematical function called the Gudermannian function52, which connects the circular trigonometric functions and hyperbolic functions without explicitly using complex numbers – exactly what was needed for the electrical engineering problems of the mid-20-th century.

The Gudermannian function, for real values of \(x\), can be defined in various equivalent ways as

A plot of the function is shown here:

So, on the Hemmi 153, while direct scales of hyperbolic functions are not present, their values can be found by taking the sine or tangent of values of the Gudermannian function. No doubt many may have felt that this was an over-complicated procedure, but others likely saw this as a very efficient and flexible arrangement of scales with far-reaching potential for use in a variety of mathematical problems.

There were 18 basic scales on the Hemmi 153. Eleven of these are standard slide rule scales, namely L, K, A, B, CI, C and D on the front; and C, LL3, LL2, and LL1 on the back. It was the inclusion of seven new scales – none of which are logarithmic – which made the 153 stand out. Several of the new special scales eventually appeared on other Hemmi and Hemmi-inspired slide rules as well, but the Model 153 can be called a vector slide rule as it has access to the hyperbolic functions.

Given any two sides of a right triangle, one can directly compute the remaining side with the use of the P and Q/Q’ scales.

So we now have P and Q scales on the rule that each range from 0 to 1, and whose distances along the rule scale with the square of the numbers printed on the scales. Hemmi created the \(\theta\) scale to go from 0 to 90 deg such that the sine of the angle on the \(\theta\) scale can be read on the P scale. To find the cosine of the angle, one can just align one end of the Q scale with the angle in question and read the cosine at the end of the P scale, since \(\cos^2\theta + \sin^2\theta = 1\). Additionally, a separate angular scale for reading angles in radians was created: \(R_\theta\). Conversions between degrees and radians can be read directly from these two scales, plus trigonometric function values can be computed directly from either degree or radian numerical values. 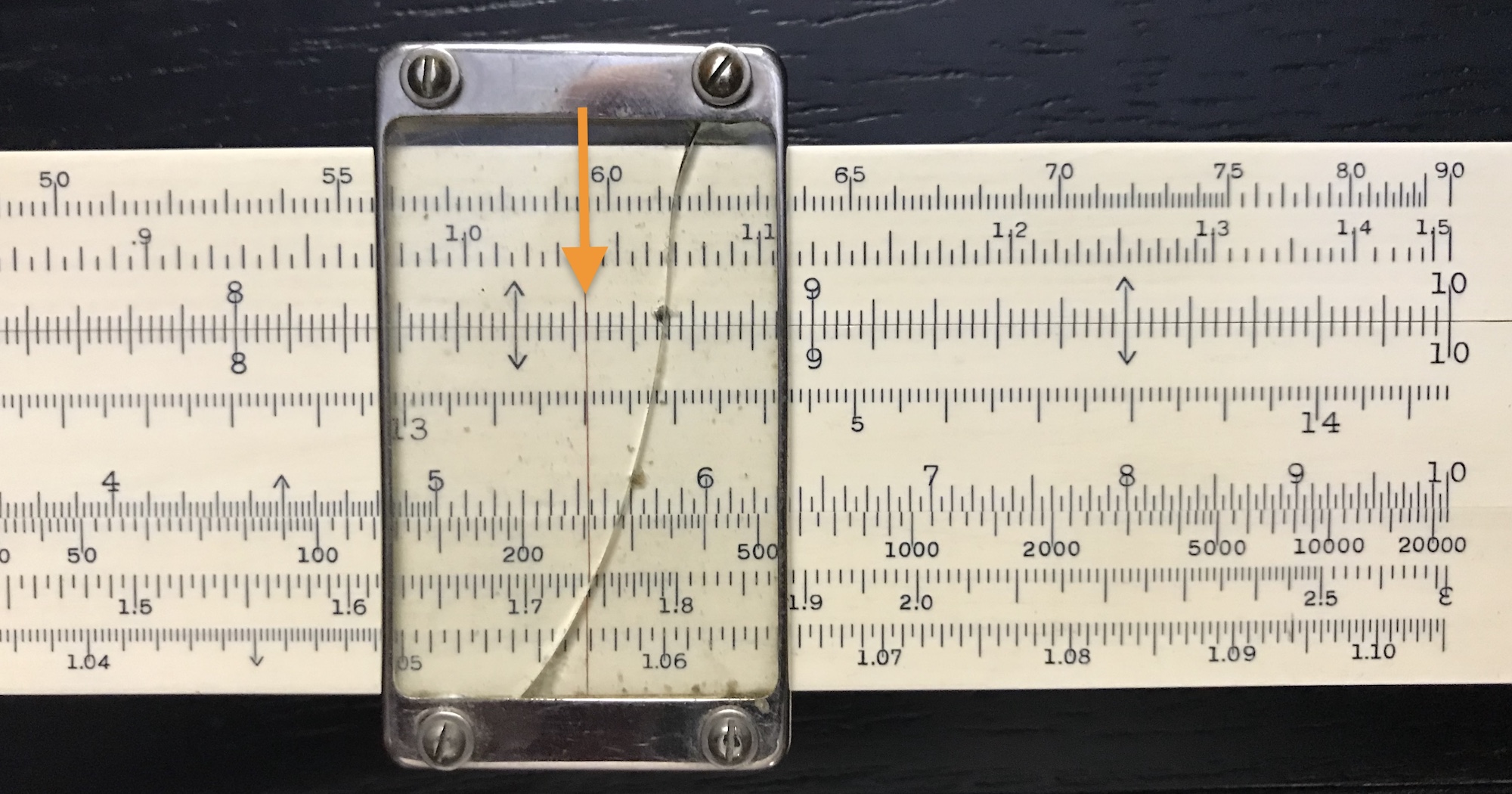 The process may seem a bit contorted, but access to values of hyperbolic trigonometric functions using the Gudermannian function allows for vector calculations as described in section Vector/Hyperbolic Calculations to be performed with the 153. The unique scale set provides for a variety of vector-related calculations using a relatively small number of scales. The number of steps involved in evaluating functions of complex numbers using this rule, however, is often larger than the number required when using slide rules with direct hyperbolic scales tied to the logarithmic C/D scales.

Though the use of the Gudermannian function is rather unique to the Hemmi 153, other scales on this model – the P and Q scales in particular – have been adopted on other slide rules, such as the Lafayette Model F-686 and the Boykin Rota-Rule found in the Collection. (The Rota-Rule designates these scales as V1 and V2, but they perform the same calculation.) The F-686 is also a vector rule, but utilizes the standard hyperbolic function scales Sh and Th.

Below is a list of slide rules in the Collection that have the Hemmi-inspired P/Q scales:

Summary of Special Hemmi Scales on the Model 153:

Further Notes on the Gudermannian Function

Putting this all together, one can find the Gudermannian function in terms of \(x\) in the following way, remembering that \(\tan (\pi/4) = 1\):

Go Directly to the Appendices.