Would you stop to consider buying this item on an online site, based on these photos?

For about $10 (including shipping!) I did. After passing it by a couple of times, what finally drew my attention was the fact that the company trademark, “Keuffel & Esser Co. N.Y.” was placed on the left-hand-side of the slide of the rule, rather than on the top or bottom of the stock as I had normally seen on all other K&E slide rules. It appeared to be fairly old, so I reckoned that for the price it was worth a closer look.

When it arrived from Florida a few days later, I spent time carefully cleaning it up. Other than the badly deteriorated case, which was missing its lid, the item spruced up rather well.

The basic 4-scale Mannheim layout, with S, L, and T scales on the back of the slide, is readily found on early K&E models such as the 4041 or 4054, from the turn of the century K&E catalogs. A quick search on the McCoy web site shows that the 4041s had laminated edges, which this one does not. (The early 4041s in my possession indeed have laminated edges.) The early versions of the model 4054 did not have laminated edges, so this was a possible match. And the 4054s also had the designation of “Favorite,” which is printed on the case which arrived with our slide rule, thus increasing their probability. While looking at the McCoy descriptions of the 4054, however, mention is made of a very early K&E slide rule that is an even closer match to the present example – the so-called American slide rule:

Not to be confused with A Favorite Rule, the Favorite rule was a brand issued by Keuffel and Esser to one of its new slide rule models in 1899, the model No. 1748-3. Two years later, when K&E re-numbered their entire slide rule line, “Favorite” became the brand for its models numbered 4054 and 4056. However, the American rule owned by McCoy is to date the only known example with this American branding, and is thought to be a precursor to these models. No model number is indicated on the American rule itself, as the name appears only on the case of the slide rule, and no mention of such a rule can be found in any of the K&E catalogs.

After close inspection, the features of our new find are all the same as for the above American rule, with the following slight exceptions: (a) the K&E trademark is on the slide, as mentioned earlier; (b) our present rule has \(\pi\) gauge marks on A/B; (c) the pin on the top of the cursor is located to the left of the K&E trademark, as opposed to directly in the center of the trademark as McCoy’s sample; and (d) the stock has rear view ports on each end of the rule, while McCoy’s American rule has only one, on the right end. But it is the slide rule case of McCoy’s example that gave his rule the identification as the American slide rule. As we saw above, the slide rule from Florida has the exact same markings on its case, but the word American is replaced with the word Favorite. Other than the few small detail differences mentioned above, these two rules are fundamentally the same rule. Here is a composite image of our American Favorite specimen: 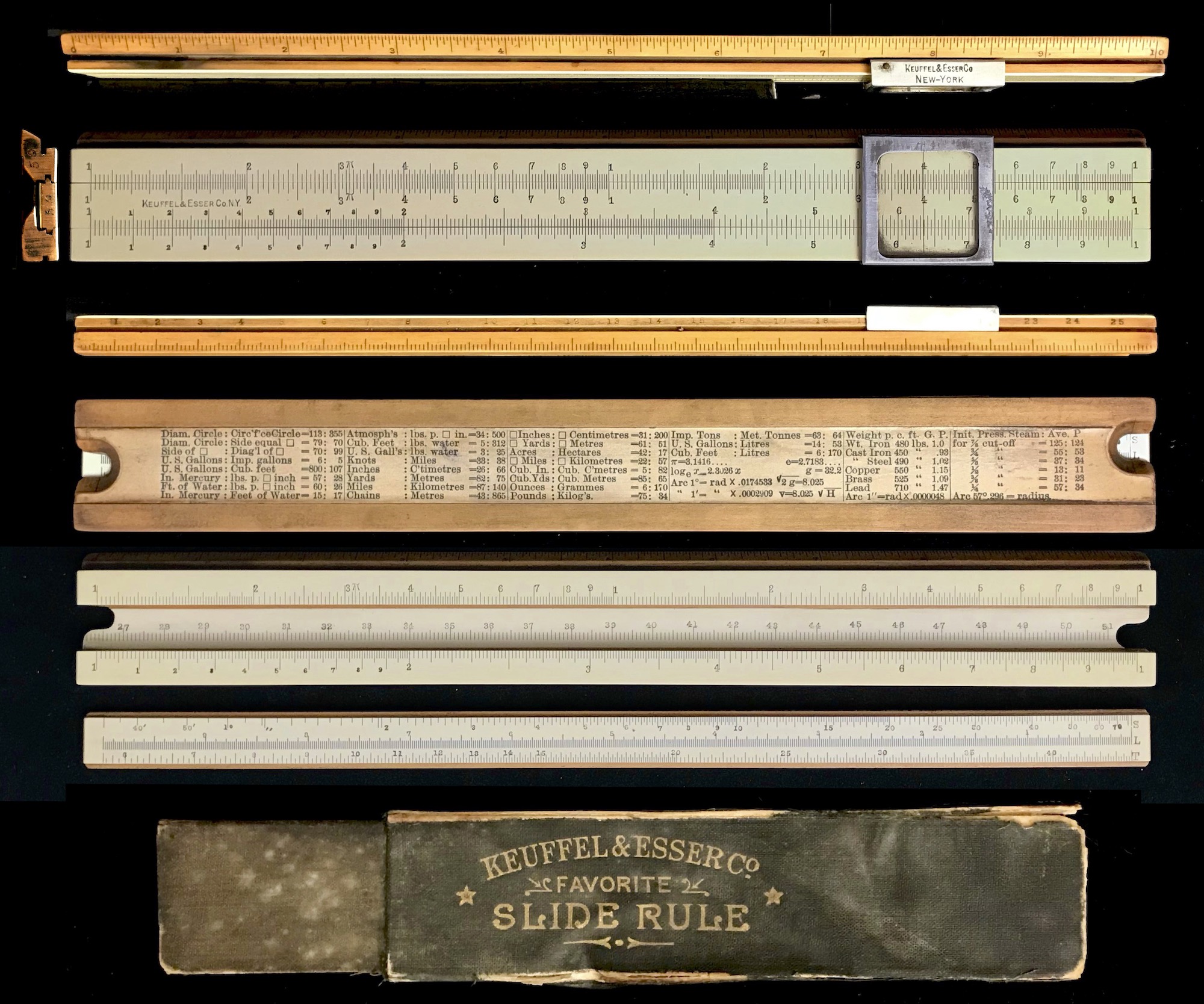 The 1899 K&E catalog introduces the 10 inch Favorite slide rule for the first time, the 1748-3 (Favorite). It is interesting that the images drawn for the Mannheim slide rules in this catalog have the K&E trademarks on the bottom of the stock in each case; and, this is true for the American rule specimen as well. The 1899 catalog was also the first to note, here in reference to the 1748-3, “We offer this rule in place of similar imported rules, over which it has the advantage of being seasoned here, so that it is very much less liable to warp or shrink.” This statement was the first official mention by K&E that they were manufacturing their own slide rules in the United States. According to the K&E 100th Anniversary Brochure from 1967,19 slide rule production officially began in 1891, but the mahogany used for the slide rules went through a 5-year long seasoning process. Thus, one can expect that the early American-made slide rules became publicly available in approximately 1896 or so.

McCoy’s American rule is the only previously known example of this rule to date.20 It is not described in any of the K&E catalogs. A long-held theory is that this rule was so-named as it was likely the first model actually constructed in the U.S. by K&E in the late 1890s; previous Mannheim K&E rules having been imported from Germany. Interestingly, in 1900 K&E received a patent for their adjustable frame, which our rule and the American rule do not have.

All of the above suggests that the slide rule we have here was one of the very earliest slide rules manufactured in the U.S. by K&E, somewhat transitional between the American rule of McCoy and the introductory 1899 “Favorite” model.

Below are images of the American rule from the McCoy collection, our American Favorite rule, and a couple of early model 4054s from both collections for easy and direct comparisons. Note the wider cursors of the American-style slide rules compared to the 4054s, and the small difference in artwork on the cases.