Enrico Fermi, the famous Italian-born physicist often referred to as the “architect of the nuclear age,” arguably was one of the very few physicists to excel professionally in both theoretical physics and experimental physics.  He was also noted for always having access to a slide rule, often from his suit coat pocket.

Born in Rome in 1901, Fermi received his laurea (equiv. PhD) at the age of 20, became a professor in Rome in 1926 and was awarded the Nobel Prize in physics in 1938 for his work on induced radioactivity. Later that same year he left Italy with his wife of 10 years, Laura. He eventually arrived in New York in 1939 where he was greeted with 5 job offers at competing universities. He accepted the position at Columbia University in NYC, but in 1941, moved to the University of Chicago, prompted by efforts on the Manhattan Project during WWII.

A remote location in Argonne Woods, outside of Chicago, was selected as the construction site for the first nuclear reactor; but an industrial dispute halted the work there. Not deterred, Fermi convinced the university that it was safe to build the demonstration reactor on campus — and so a new location underneath the bleachers of the football field was chosen and the first sustained nuclear reaction was achieved in 1942. And the rest, as they say, was history.

Several photographs and images of Fermi with a slide rule exist, several of which can be found on the ISRM site25. 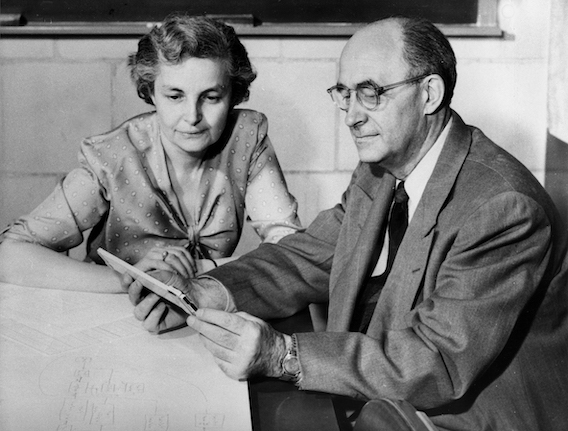 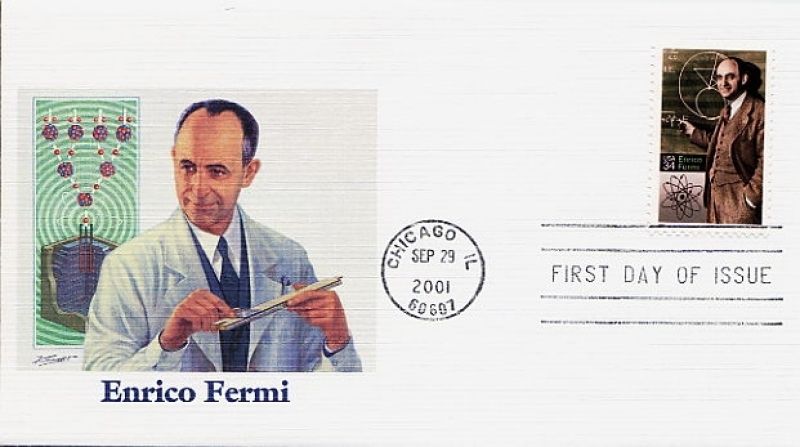 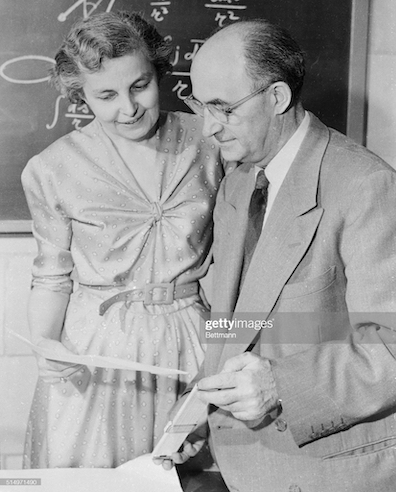 However, these photographs never reveal the make or model of the rules that Fermi used. Did he have a favorite? Was it a common rule or a specialty model? It was clear that he used several different slide rules, as would be expected, since some accounts tell of his use of a “6-inch” model, and other images clearly show standard 10-inch rules.

In 2010 Fermi’s granddaughter, Olivia Fermi, gave a presentation in Vancouver, British Columbia, Canada, which was reviewed in the Vancouver Observer26. The article provides a photo of Olivia holding “the slide rule used by her grandfather, Enrico Fermi.” Her web site27 also contained a reference to the event, along with a photograph of her grandmother Laura’s book, Atoms in the Family28. This photo also contains the same slide rule. 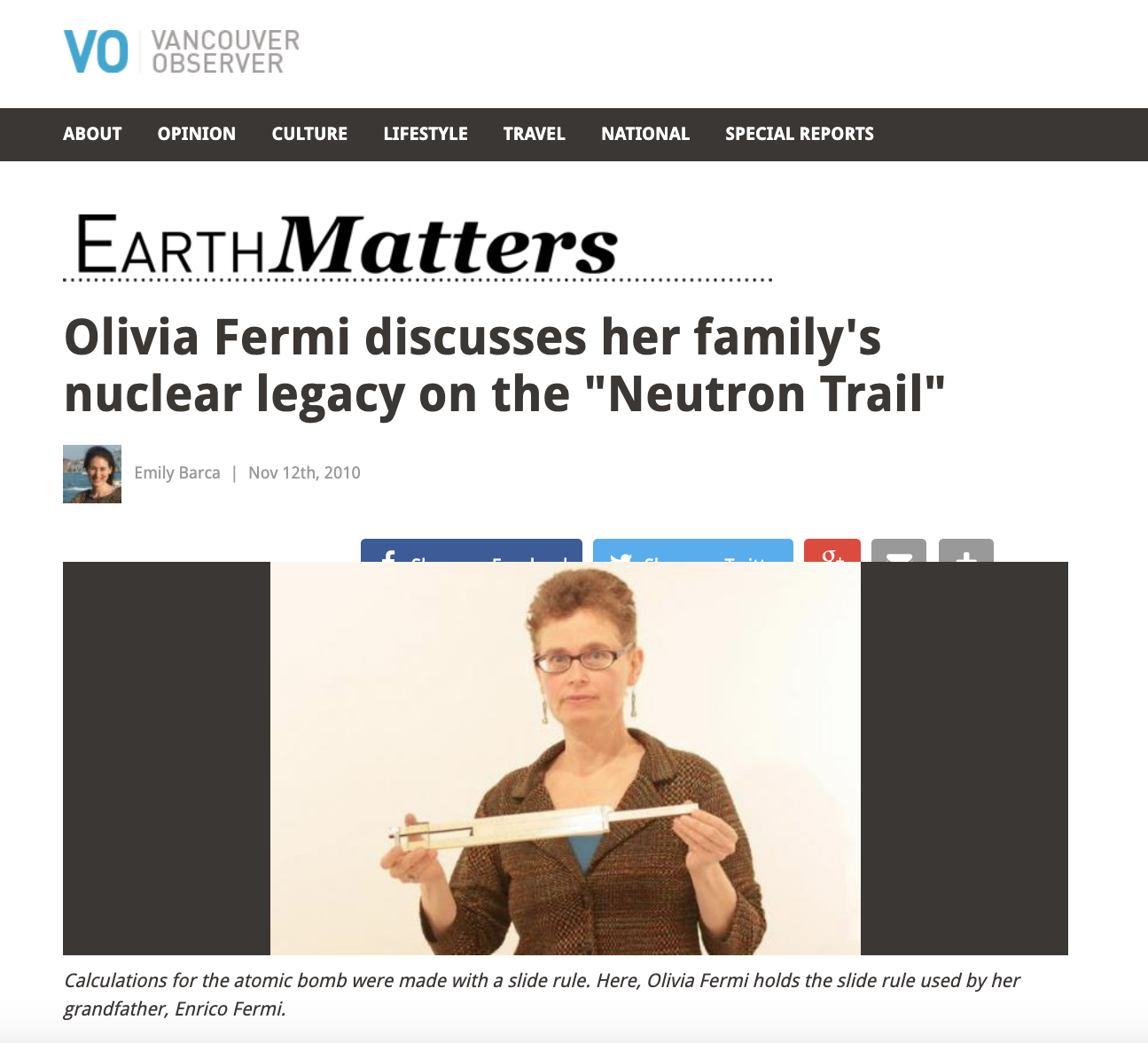 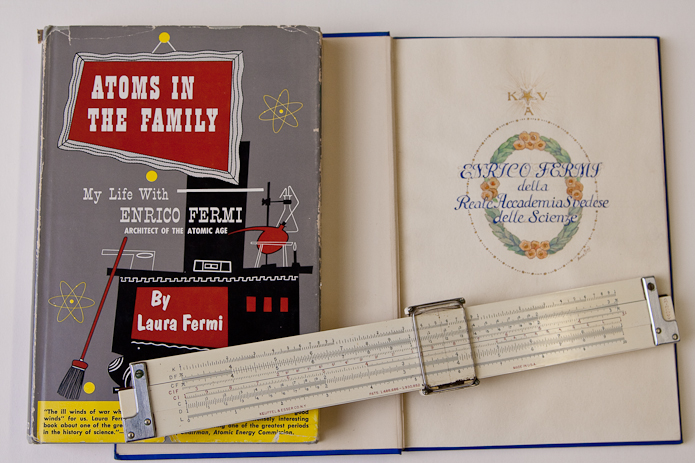 A close-up of the slide rule (see below) reveals that it is a Keuffel and Esser. And, from the scales on the rule –

– it is clear that it is a K&E Model 4092-3, the only K&E with this particular set of scales on either side of the rule. The original 4092 in 1909 was the first K&E model to introduce a segmented Log-Log scale, allowing quick calculations of exponential growth and raising numbers to arbitrary powers. The addition of an “LL0” scale for even finer calculations of initial exponential growth was made in about 1915, and the rule was renamed 4092-3 in about 1922, to differentiate it from the longer 20-inch model (4092-5).29 These features would have been very important for the calculations and data analyses performed by Fermi at that time. A K scale was added to this model in about 1925 and, interestingly, the 4092-3 was discontinued in 1937, the year before Fermi was awarded the Nobel.

The image shows the sans serif type used in the lettering of the scales as well as the K scale at the top, which helps to date this rule from between 1925 and 1937. If one could get a glimpse of the other side of the rule, a serial number would help to determine the exact year of construction.

While this is not the only slide rule that Fermi used professionally, it is the only identifiable slide rule I’ve been able to find that was definitely used by Fermi. It was considered a very powerful slide rule in its day, and became a fairly popular model at that time. And because examples of the late 4092-3 can be readily found, it is also fair to say that many of us collectors own the same model slide rule as that used by Enrico Fermi! Here are pictures from the Collection:

Though slide rules were ubiquitous among physics professors and students during the dawn of the nuclear age, the term “Fermi’s rule” had a very different meaning to graduate students of physics, having nothing to do with slide rules. In the area of quantum mechanics, Fermi’s Golden Rule is an equation that describes the rate of transition from one initial quantum state to another final quantum state:

It’s derivation (along with the meaning of the various symbols!) can be found in many introductory textbooks on quantum mechanics.30 Although Fermi’s Golden Rule was not referring to a slide rule, they certainly were used in its evaluation for many decades! 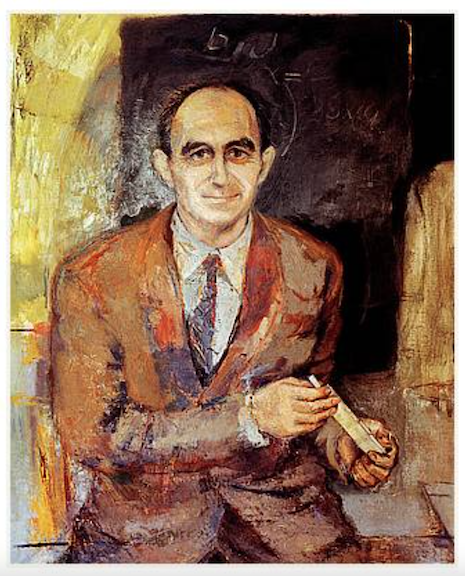 Painting, University of Chicago, commissioned by the American Institute of Physics.

Since writing the above vignette I made contact with Enrico Fermi’s granddaughter, Olivia Fermi, and learned much more about this slide rule and another one owned by Enrico. For more information, see the the talk and paper delivered at the International Meeting of September 2022. For further information about the K&E 4092-3, also read the vignette Rule Change 4092-3.