The Keuffel and Esser Company, USA, founded in 1884, sold slide rules starting in 1886 and began manufacturing their own rules in 1891. They were the first U.S. company to manufacture slide rules, and continued doing so until 1976. Early in their production history the company began to produce a less expensive rule for students, or “beginners,” as first shown in their 1897 catalog. A fine chronology of their Beginner’s rules can be found at the web site maintained by Clark McCoy where he and Michael O’Leary have documented much of K&E’s history. Further information on the Beginner’s rules can be found in a 1995 article in the Journal of the Oughtred Society by Babcock.16

The Collection contains a variety of K&E Beginner’s Rules that nicely illustrates the development of the line over time, consistent with the time line put together by McCoy. The early model number was “1749,” but was changed to “4058” which lasted for over six decades. A newer all-plastic model with more scales – the “4158” and “68 1892,” also labeled “K12 Prep” – replaced the 4058 line in 1961 until about 1972.

The time line below is reproduced from the McCoy site, where the remarks have been generated from the information found in the K&E catalogs obtained by the authors. The dates below refer to the dates of K&E catalogs. Images of relevant items from the Collection are interspersed:

As can be seen in the image above, the 68-1892 in the Collection is the special edition model, mounted on a heavy leather pad for ease of operation on a desk. (Note: There are no scales or other text on the back of these newer-model Beginner’s rules.)

Keuffel and Esser’s Beginner’s slide rule family was used for introducing students to the slide rule and for the initial training of the future’s scientists, engineers, and business executives. It was not unusual for schools to buy supplies of Beginner’s rules to be used for several years by many students. As ascertained from the 1929 K&E catalog according to Babcock17, “the 4058 with the Xylonite indicator was $0.75, the 4058C with the frameless indicator was $1.00, and the 4058W was $1.25, or 33% more expensive than the 4058. However, this was still much less expensive than the $6.50 for a basic model 4041 Mannheim rule.” 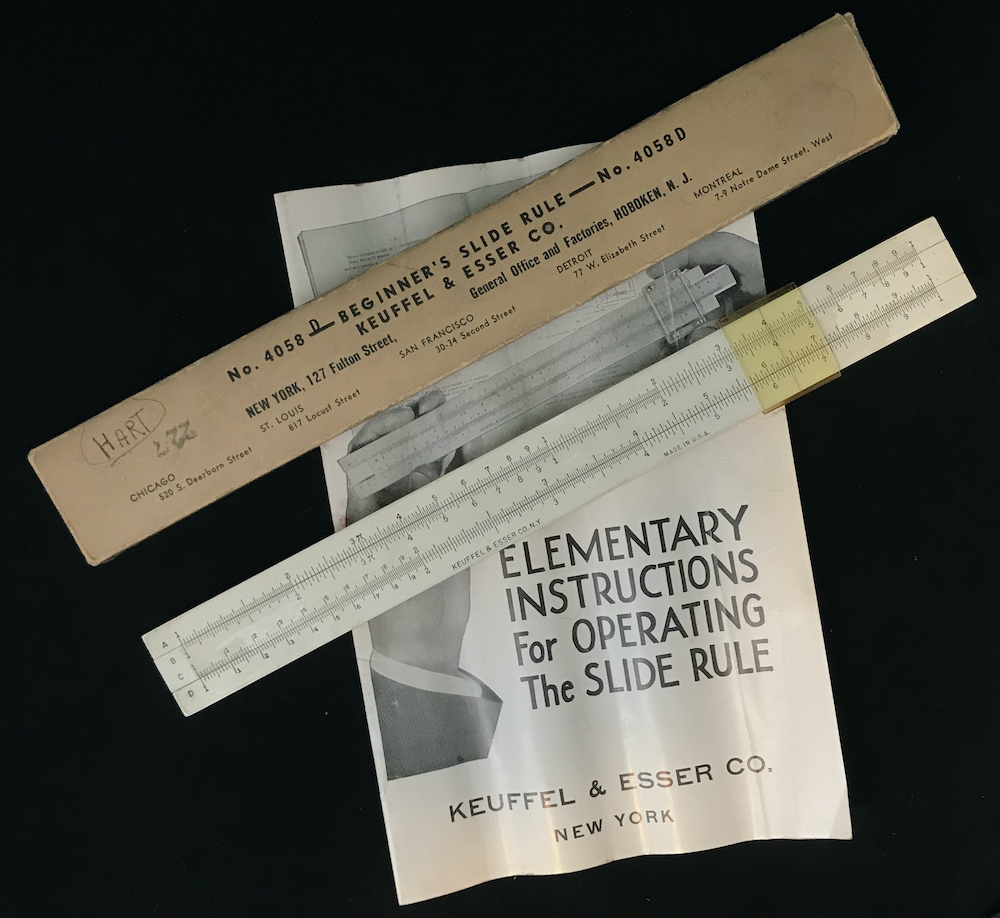